To watch San Diego’s Chris Paddack throw his changeup is to watch a hitter realize that his world is made of lies. Of course, this is the measure of any good changeup; it is wholly different from the straightforward humiliation of being overpowered by a fastball or the understandable failure to grasp the geometry of a curveball. Instead, it is something much more bleak, more personal, more insidious: you believed you knew what you were seeing, you thought you could trust yourself, and, oh, look how wrong you were.

Chris Paddack was not a lock to make the Padres’ opening day roster. He has rewarded the Padres’ faith in him by dominating National League hitters six innings at a time. Paddack has been a joy to watch, with an entertaining mix of stuff, command, and personality. Paddack has thrown his changeup around 31% of the time thus far, and it’s been stumping hitters.

The Reds’ Luis Castillo has been nearly as good as Paddack, with an ERA of 1.90 and a 2.65 FIP. also on the back of the changeup. These are much closer to the numbers analysts always thought the young Reds pitcher was capable of. Castillo’s changeup usage has increased from 26% in 2018 to 32% in 2019 to this point, and it’s a beauty.

Kyle Hendricks has always been one of my favorite pitchers to watch, partially because of his changeup, which he has thrown around 29% of the time this year. Hendricks succeeds by keeping hitters off balance through command and pitch tunneling. Hitters have trouble distinguishing his fastball from his changeup before it’s too late, and they’ll reward him with awkward swings and takes.

In contrast to these three starters, picture the stereotypical 2019 middle reliever. He throws a fastball in the mid-90s with above-average spin, and a wipeout slider. If he gets blown up in an outing, he’ll probably be sent down to Triple-A for a brief stint, or placed on the 10-day IL with some form of tightness or discomfort, only to be replaced by someone with a similar repertoire. Maybe a team will catch lightning in a bottle and he’ll have a season that nets him a two-year extension or free-agent deal, during which he’ll underperform fan expectations despite the peripherals only being slightly worse. This reliever’s arsenal seems to defy physics, with the fastball that seems to rise and a slider that moves in ways that don’t seem possible.

The slider may be the defining pitch of the current era of baseball. It’s easily gif-able; the movement is a spectacle in and of itself. Adam Ottavino’s wiffle-ball slider, known for its hypothetical ability to strike out Babe Ruth, is designed to get hitters out, yes, but it’s also designed (albeit unintentionally) to be passed around for all to see on the internet.

Changeups, on the other hand, may be the most frustrating pitch for hitters. It’s easy enough to get beat by a slider with great movement and tip your cap. It’s harder when, as Baccellieri writes, the changeup makes you beat yourself.

The changeup is not a devastating tool that works on its own, it needs to be set up by other pitches in a pitcher’s arsenal. It speaks to the fabled “pitchability,” that oft-mentioned trait that pitchers like Hendricks possess.

As one might guess from the three starters featured above, the changeup is having a bit of a breakout in 2019. Pitchers are throwing changeups (blue) at a higher rate than they have since at least 2013, but the rate pales in comparison to that of sliders (red). This is the era of the slider, but the changeup is making a stand. 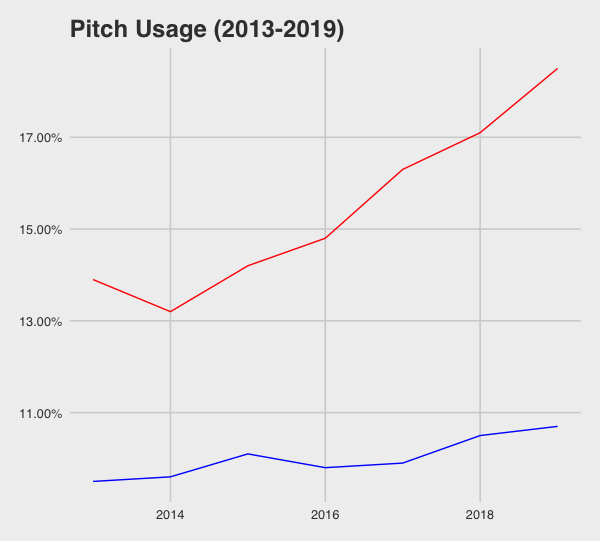 Fangraphs calculates “pitch values” for each type of pitch. These give a rough idea of how valuable different pitches have been based on how well they have performed compared to expectations in any given situation. In a small sample this season, the changeup (blue) has been worth the most per 100 pitches it’s been since at least 2013, and the slider (red) is at its least valuable since then. These numbers are potentially skewed by the early success of changeup-heavy pitchers, but it is still a trend worth watching. 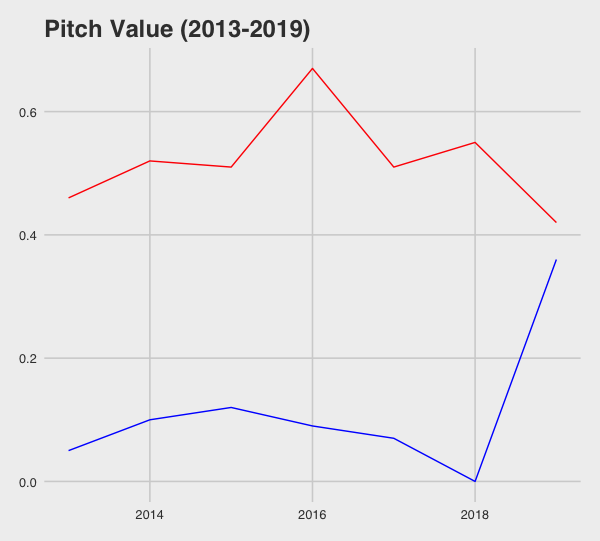 I enjoy watching sliders and high-speed fastballs, but for me, nothing beats the subtlety of the changeup. I’m looking forward to watching more pitchers fool hitters with changeups in 2019, and do it better than they ever have.