Tyler Chatwood had a 2018 to remember, but not one that he’ll want to remember. He received the first black ink1 of his career, leading the league with 95 walks on his way to a 5.30 ERA and a 5.50 FIP.

During the first few starts of his new contract, Chatwood outperformed his peripherals, allowing him to post a 2.83 ERA through the first month of the season. However, that number regressed quickly, as he allowed a 5.92 ERA through the next three months, largely due to his command vanishing. Chatwood was relegated to bullpen duty after the Cubs acquired Cole Hamels on the eve of the August 1st waiver trade deadline in 2018. In limited time as a mop-up reliever, he did not pitch well, allowing ten walks, ten hits, and nine runs in just 9.2 innings of work.

The Cubs would have loved to move Chatwood’s contract ($25.5M remaining after 2018) before the start of the 2019 season, but understandably could not find any takers for the righty after his lost season. Many wondered if the team would have to eat his contract and cut him loose or work out an agreement to send him to the minor leagues to try and find an answer to his command troubles.

On May 25th, he got his first save for the Cubs. If you were to tell a Cubs fan this before spring training, they would assume that something had gone horribly wrong in the Cubs bullpen. In some ways, it has—several relievers have fallen prey to injury, some to bouts of ineffectiveness, and the rest to overuse. Tyler Chatwood, however, has been a bright spot.

In 2018, 55.9% of Chatwood’s pitches ended up out of the zone. He has managed to lower that rate to 52.9% in 2019, his lowest since 2013. Hitters are whiffing on 20.3% of their swings at pitches in the zone, compared to just 15.1% in 2018. Chatwood is hitting the edges of the strike zone at his highest rate since 2016. His walk rate is still too high, but it’s down four percentage points from 2018, and his strikeout rate is up by nearly three percentage points. When Chatwood missed the zone in 2018, it was often by a great amount. In 2019, it seems as though he’s missing closer to the edges of the zone, instead of just throwing non-competitive pitches. Chatwood also has the ability to generate soft contact—he cut his barrel rate in half between seasons. While it isn’t something one can rely on consistently, the weak contact does help negate some of the walk issues.

In concert with his improved command, Chatwood’s stuff has played up in relief. He was always someone with notable stuff (it’s the reason the Cubs signed him in the first place), but in relief this season it’s been even more impressive.

His curveball is breaking more than it ever has… 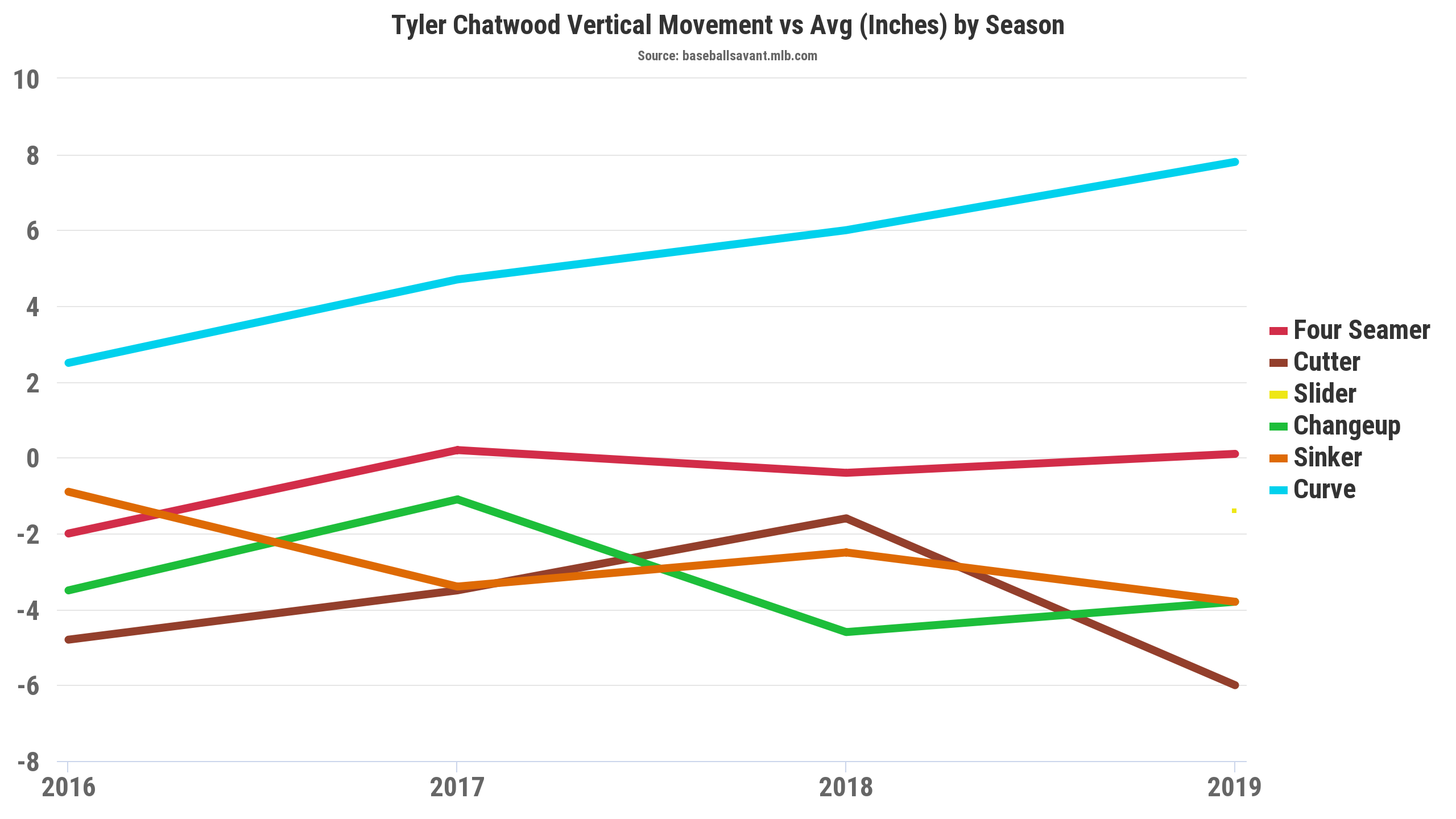 …and he’s throwing the hardest he ever has: 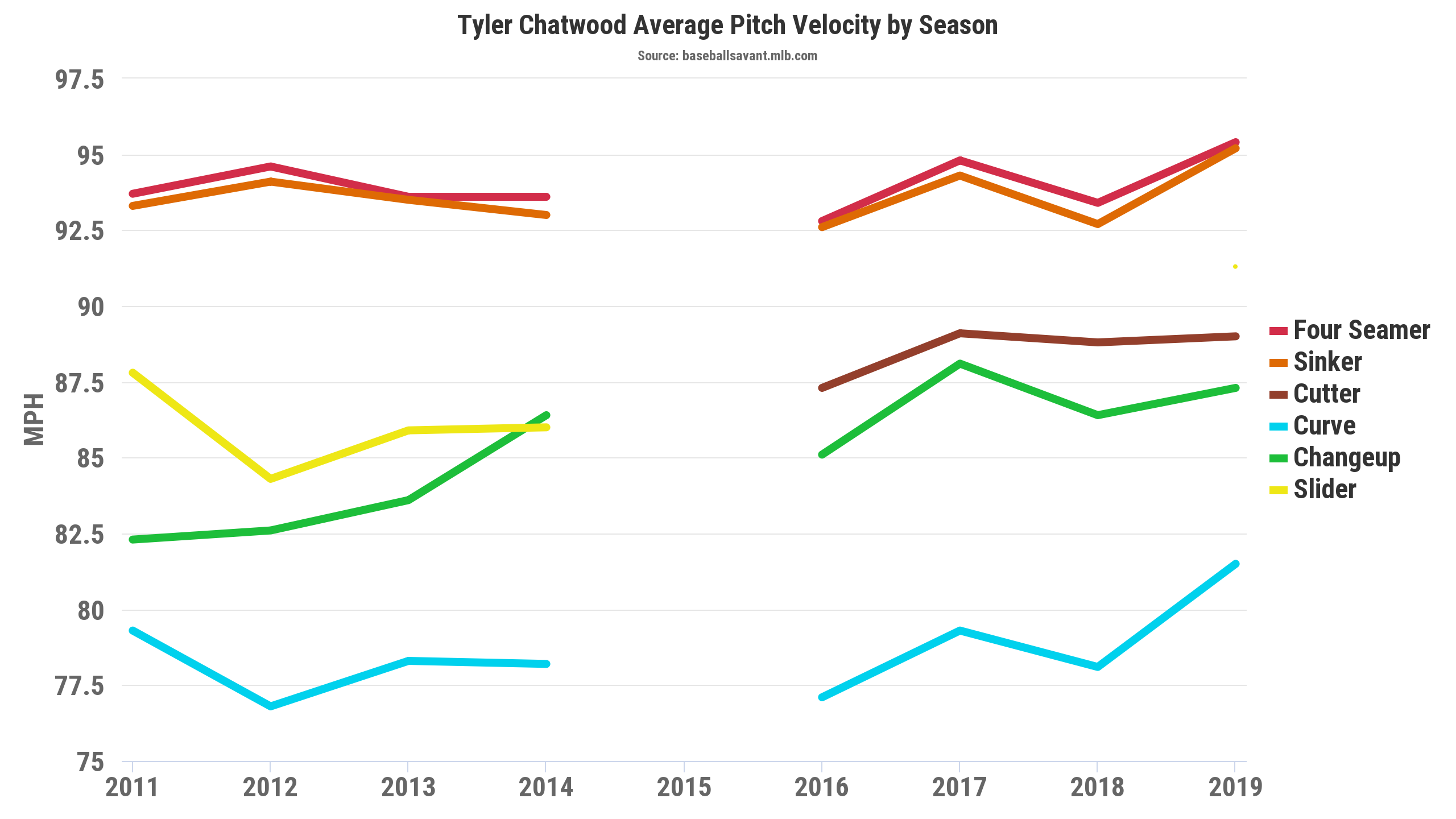 Perhaps because he’s throwing harder, he’s getting more spin on all of his pitches. 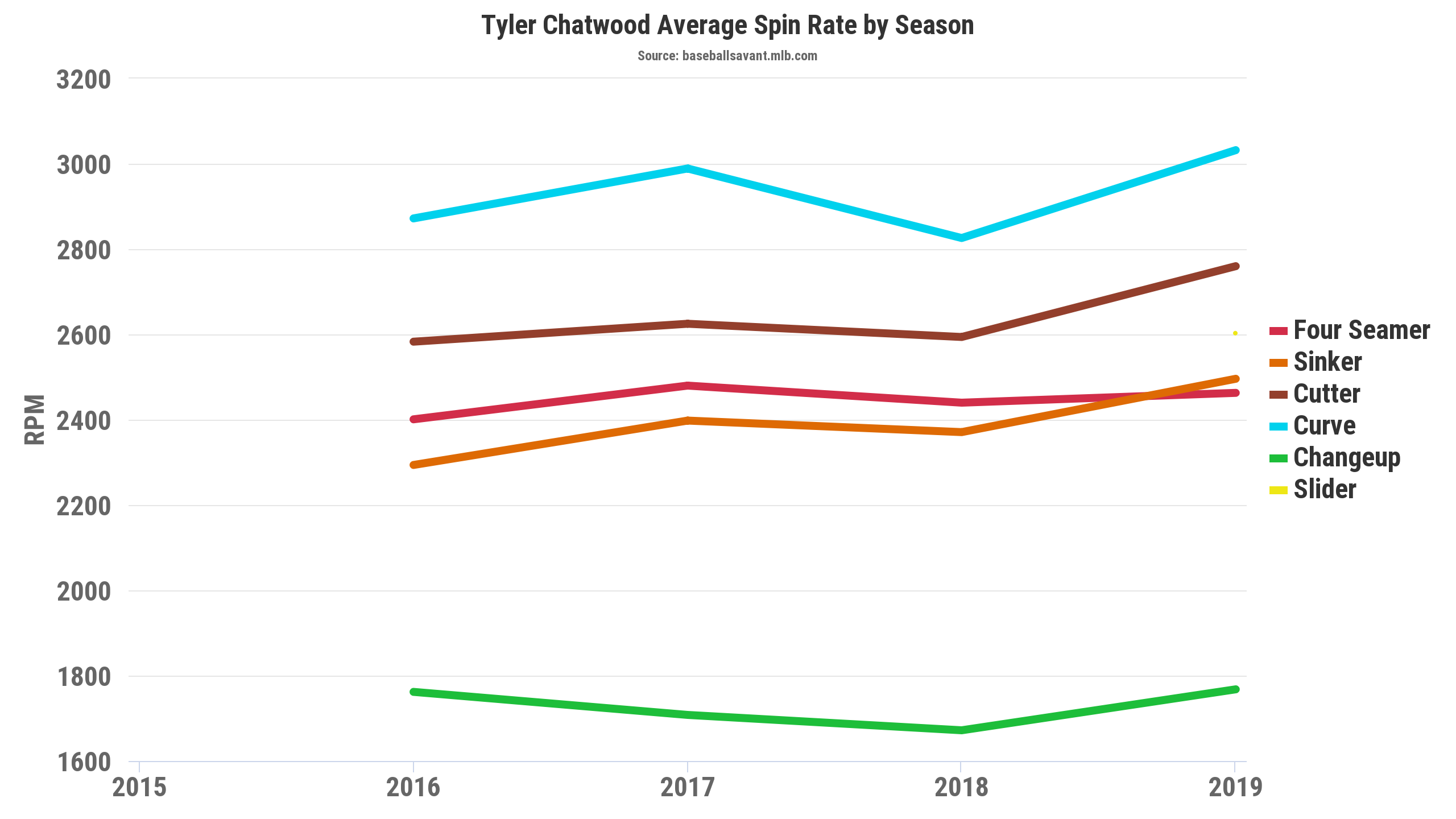 He’s throwing his sinker and four-seam fastball much more than he did last season, and he’s relegated his cutter to about the same usage as his curve and changeup. In relief, he has featured a four-seam/two-seam mix with three tertiary pitches. 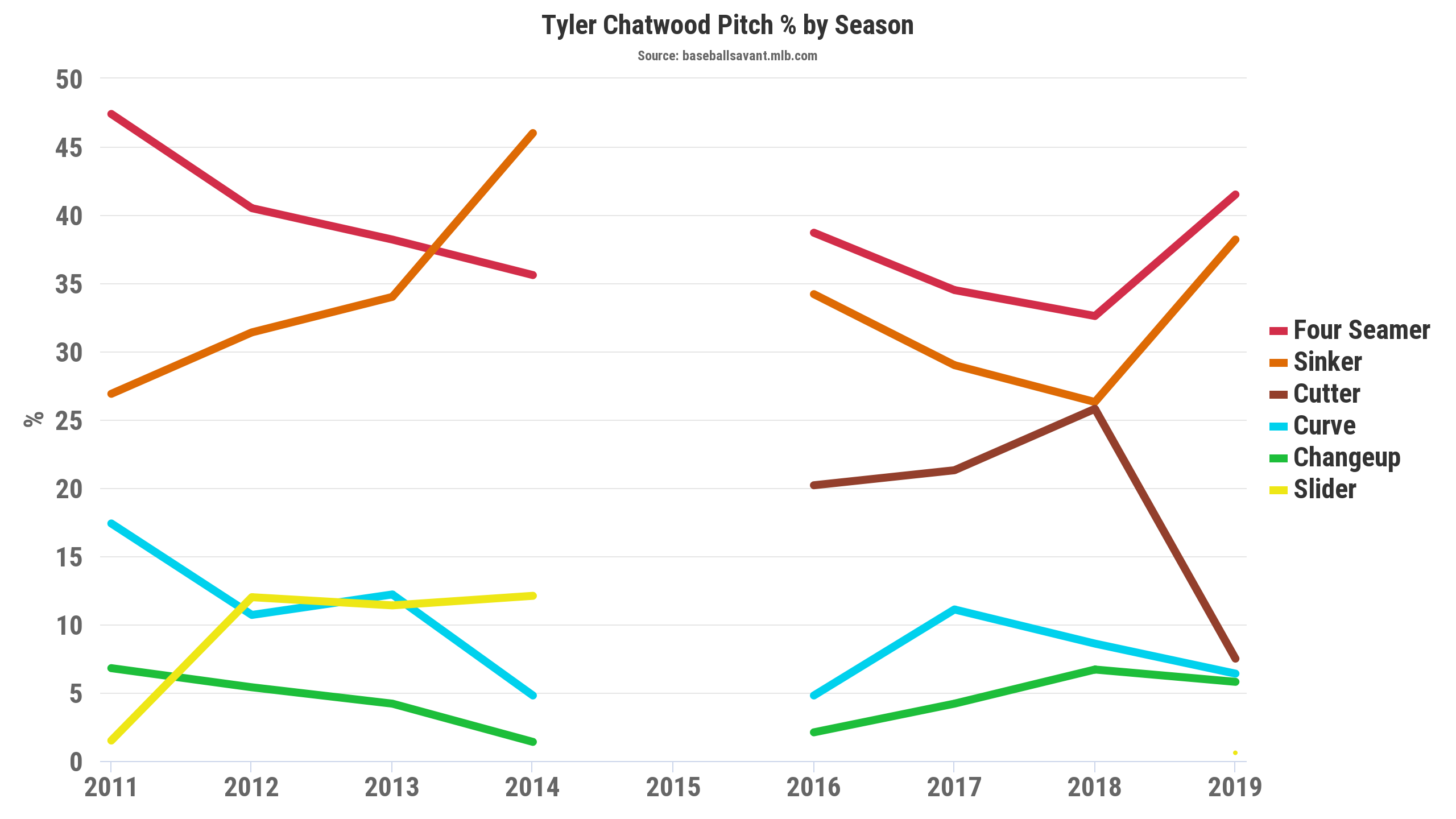 Chatwood’s best pitch may be his two-seam fastball:

This pitch, in combination with the rest of his high-spin arsenal, makes for an uncomfortable at-bat for hitters and provides the basis for a dominant reliever.

Now, Chatwood’s FIP remains high at 5.12. He’s the type of pitcher that I would expect to outperform his FIP slightly, but he’s certainly not “fixed” yet. However, the Cubs have to be pleased with what they’ve gotten out of Chatwood this season, and the peripheral numbers are trending in the right direction.

Despite all this, Chatwood’s future with the Cubs remains cloudy. He’s still owed $13M next season, plus the remainder of this year’s salary. The Cubs seem like a lock to add a couple relievers to their bullpen before the trade deadline, but they are also apparently nearing their budget cap. Chatwood is not the only reliever who can provide depth in the Cubs bullpen, as Mike Montgomery is there as well. This could mean that either long man is available to appear in shorter, higher-leverage spots, or it could make one of them redundant.

If the Cubs do end up trading one of Montgomery or Chatwood, there are cases to be made for both. Because of the Cubs’ current roster situation, it would make sense if the team tried to move Chatwood this July due to his contract and their budgetary constraints. Even if they do decide to trade their high-spin long man, the Cubs may still have to eat some money; Chatwood is making more money than most teams would want to pay for a long man or middle reliever, and he has not yet proven he can be a consistently dominant back-of-the-bullpen arm. Joe Maddon is definitely a circle-of-trust bullpen manager,2 and it doesn’t seem that Chatwood has made his way into that circle just yet. Because of Chatwood’s residual walk issues, Maddon often seems to feel the need to have a reliever warming up behind Chatwood in case he gets into trouble, which is a limiting factor in an overworked bullpen.

A Chatwood trade, then, seems unlikely. However, with Chatwood’s improved stuff and Montgomery’s cheaper contract and previously-expressed desire to be a starter, it could end up making more sense for the Cubs to trade Montgomery instead. Either way, due to his contract and the struggles of other bullpen arms, the Cubs may have no choice but to keep betting on Tyler Chatwood.