As I write this, Tigers starter Matthew Boyd sits atop the Fangraphs pitching WAR leaderboard with 1.2 fWAR so far this season. Among starters, he ranks second in strikeout rate, fourth in swinging strike rate, and fifth in in-zone whiff rate. In short, he’s been really good!

Of course, I’m far from the first to notice Boyd’s breakout. In early 2017, Fangraphs’ Jeff Sullivan suggested that Boyd’s slider could be the key to a breakout. While the slider did end up being the key to Boyd’s success, it was a new, slower version, not the faster version that Sullivan was excited about.

After the end of the 2018 season, Michael Ajeto wrote on Boyd at PitcherList, comparing him to fellow surprise Patrick Corbin, noting his increased slider usage.

Before spring training, Jason Beck wrote about Boyd using a data-driven routine to improve his health, positioning him as a prime “best shape of his life” candidate for the season.

Most recently, Fangraphs’ Sung Min Kim wrote a few things about Boyd, focusing on where the Tigers starter was locating his pitches and how well he tunnels his fastball and slider.

I think Boyd’s breakout can be summed up in five graphs and four gifs. Since 2017, Boyd’s slider and curveball have gained more (negative) horizontal break: 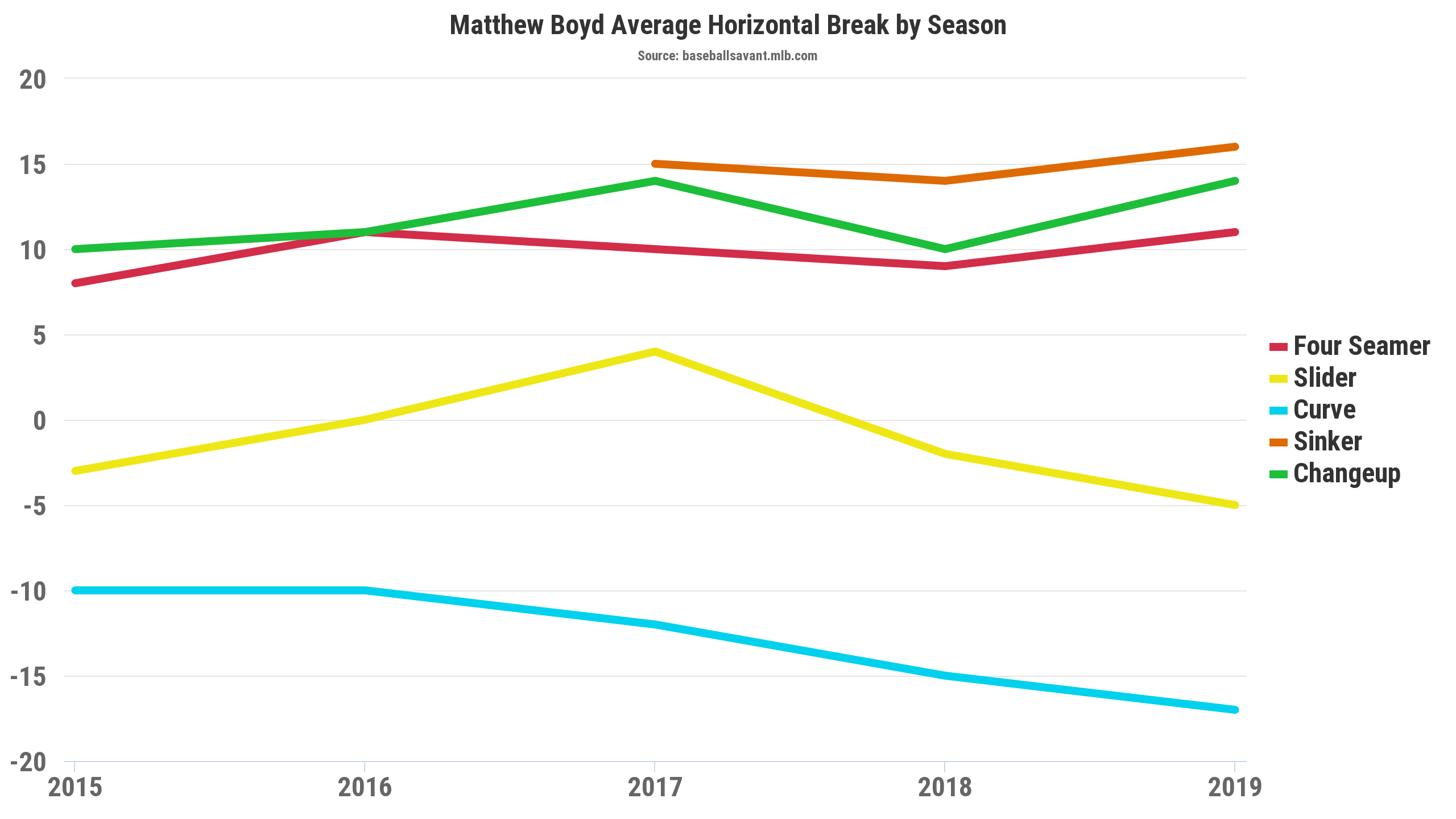 Since that same year, Boyd’s slider and curveball have both gained more vertical break as well: 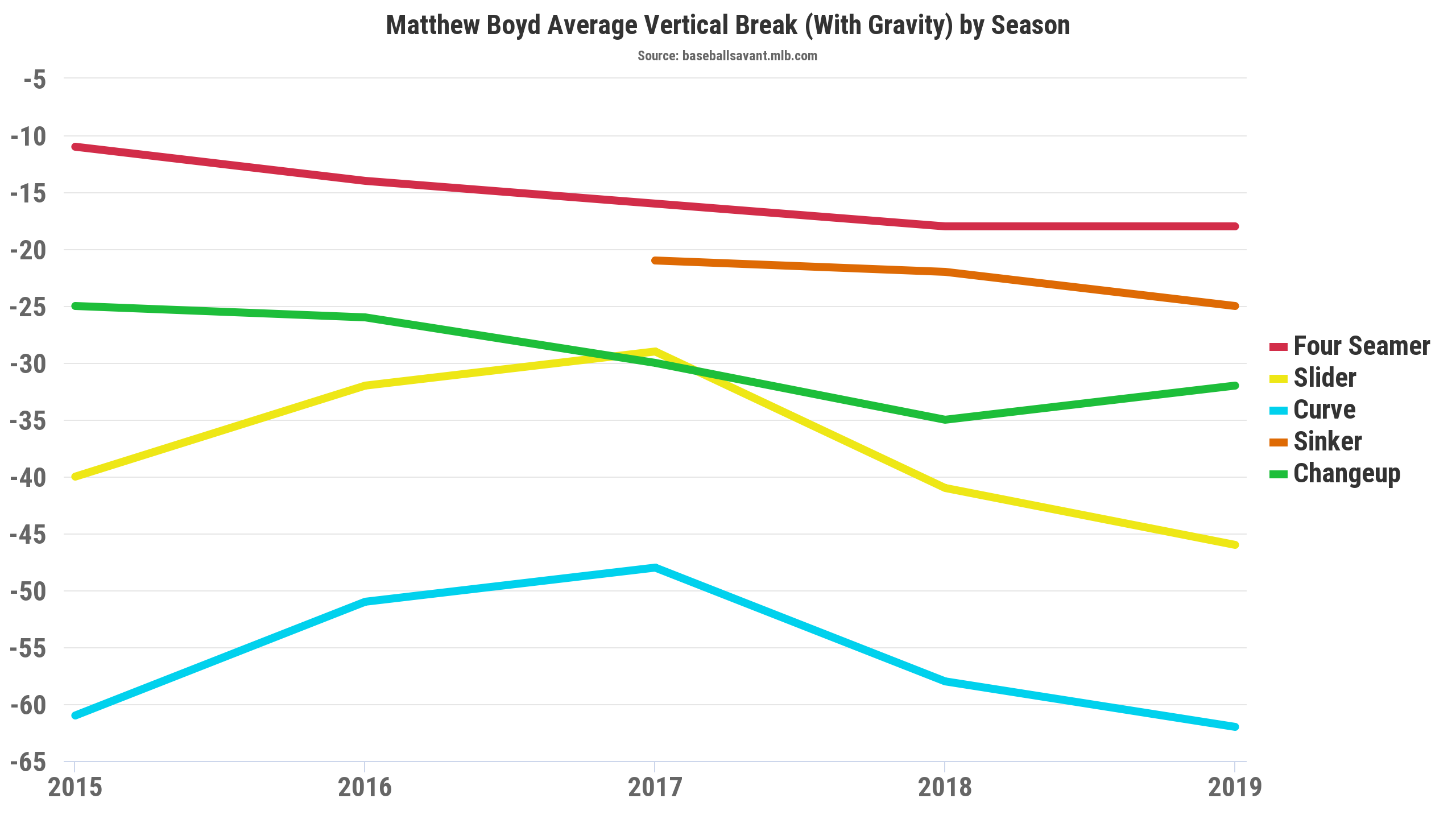 He’s started using his slider and four-seam fastball a lot more, and made his curveball his primary tertiary offering: 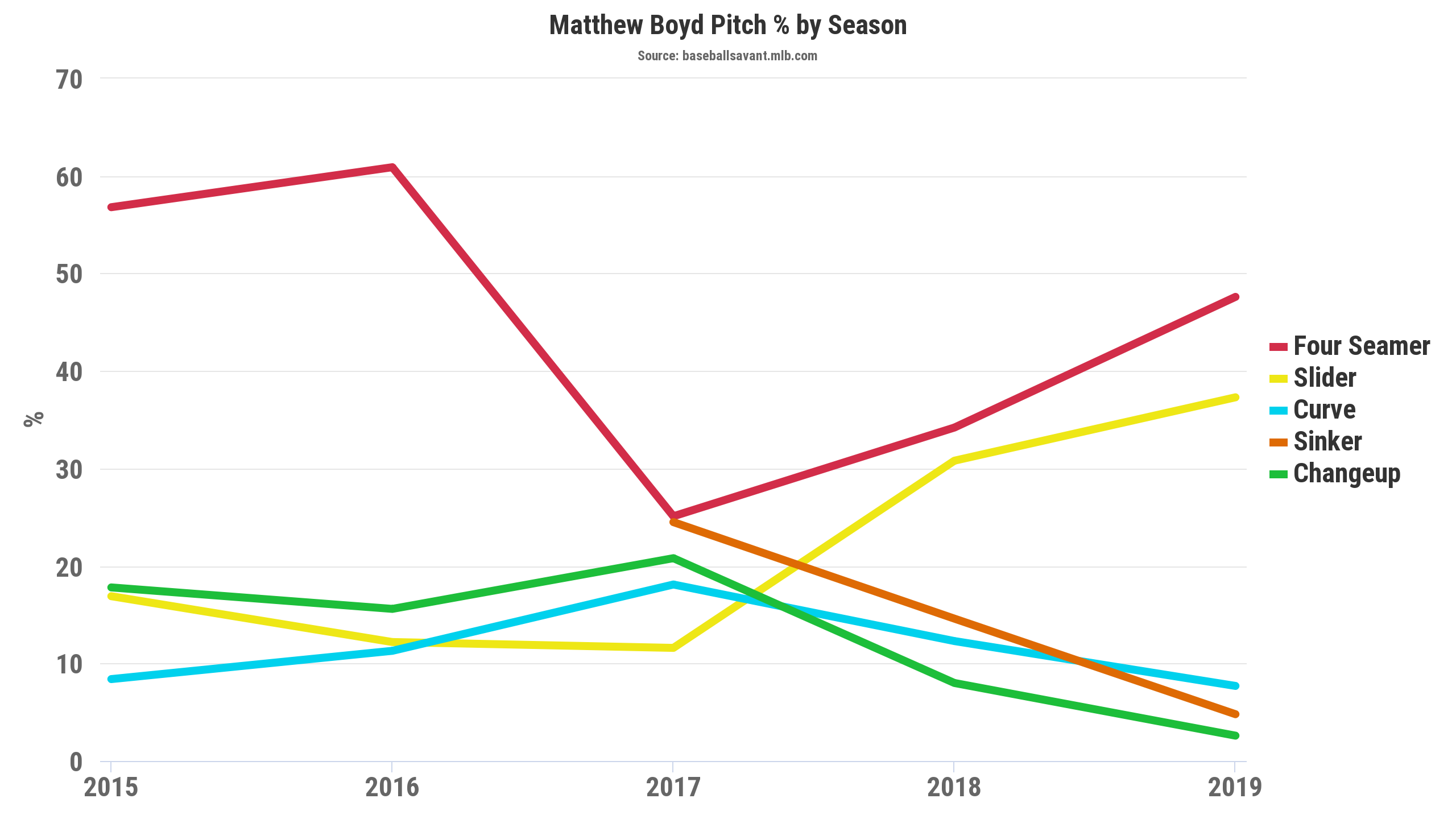 But Boyd’s breakout isn’t due to increased velocity–both his four-seam fastball and slider have decreased from their 2017 peaks: 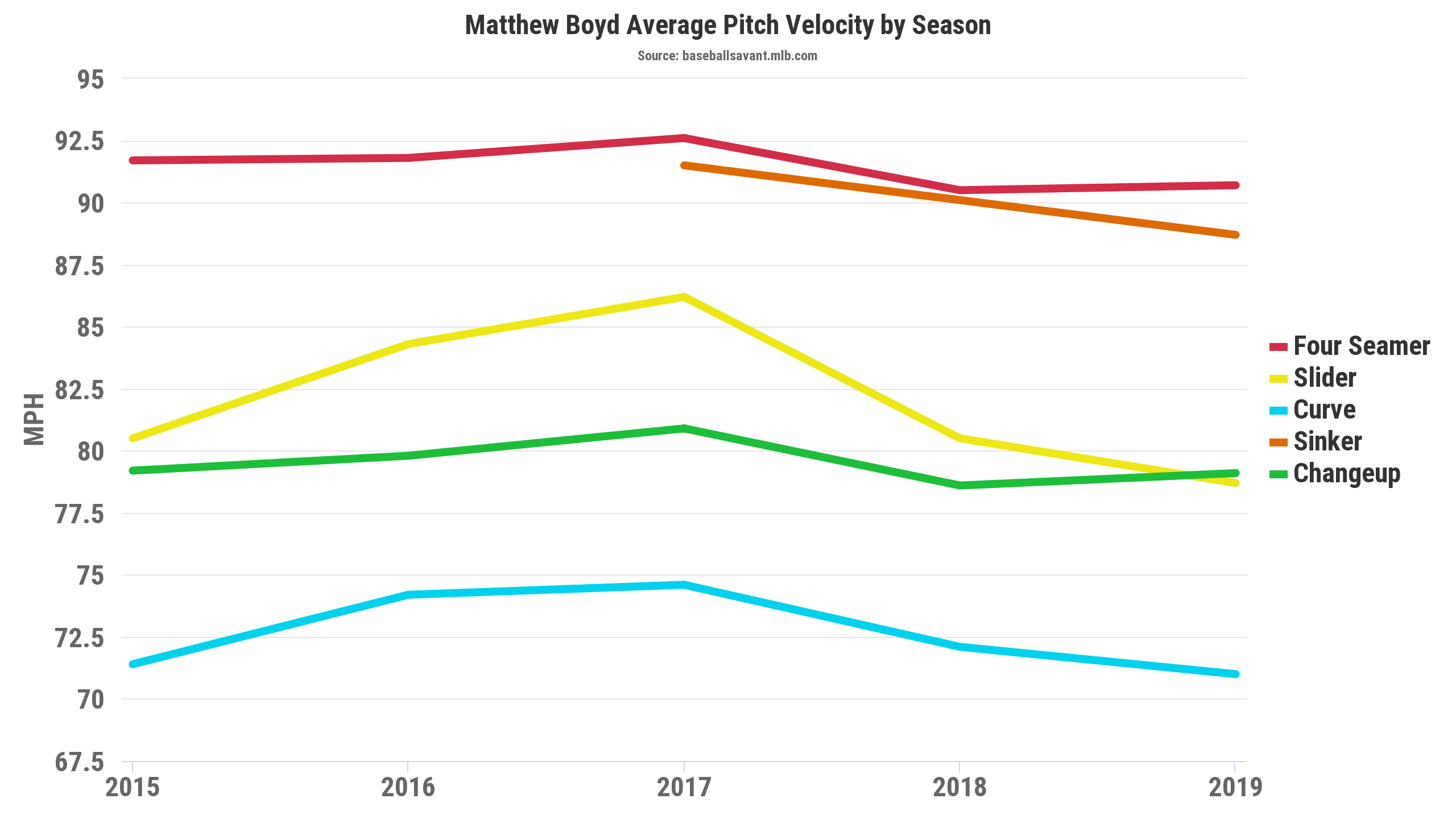 However, despite the decrease in velocity, the spin rate of his four-seamer has increased substantially since 2017, making it harder to square up: 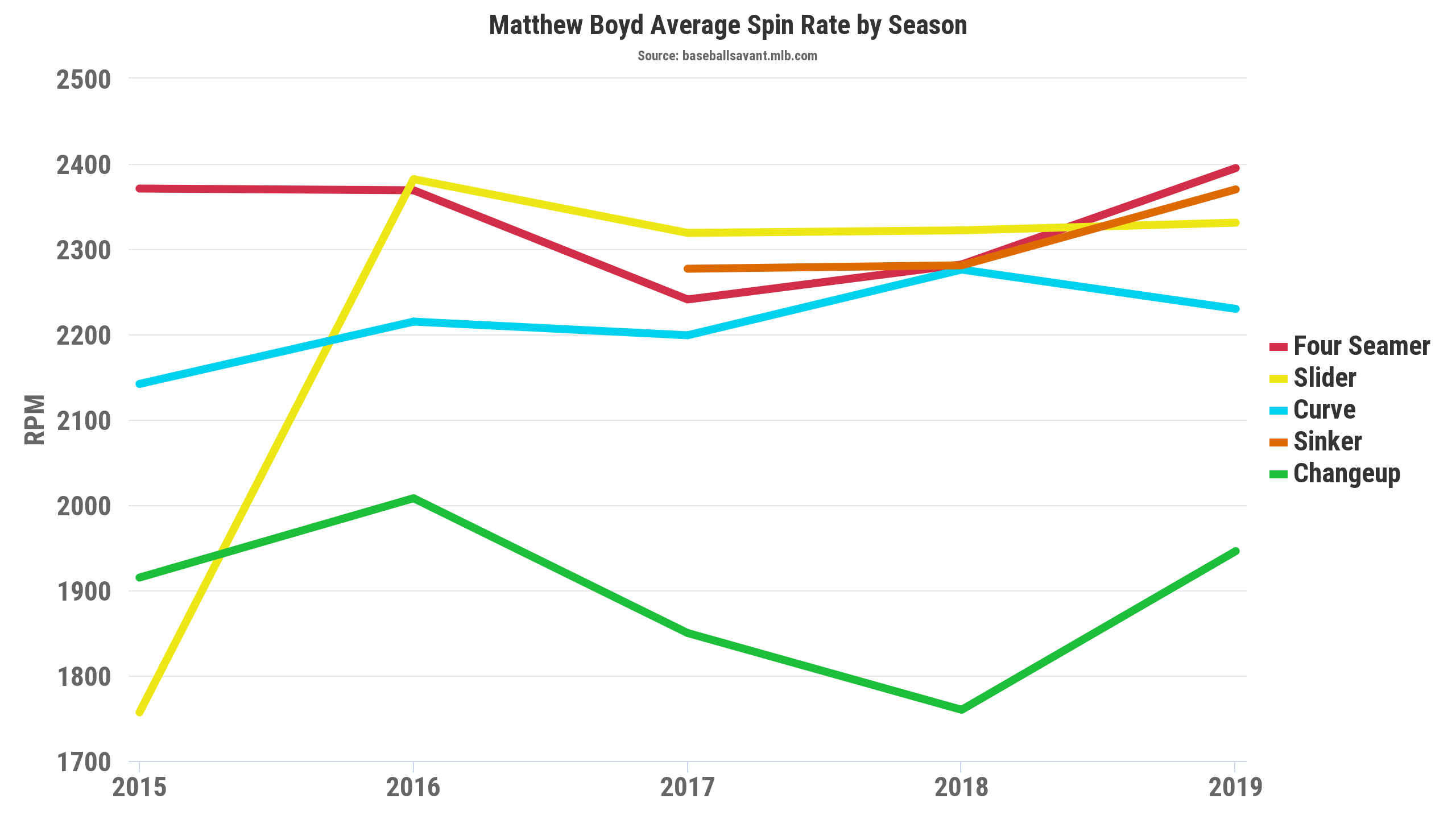 Now that we’ve seen how Boyd’s repertoire has changed, we can look at some of his actual pitches from this year.

Next, two of Boyd’s best pitch, the slow slider:

And an overlay of both breaking pitches:

Notice how similar the curveballs and sliders look. Not only do hitters have to deal with Boyd’s well-tunneled fastball and slider combination, but even if they identify that a breaking pitch is coming, the curve and the slider move similarly enough that it’s hard to differentiate before it’s too late. There is only a 4 MPH difference in velocity between the pitches in the gif, but the curve has more depth to it.

Matthew Boyd probably won’t keep dominating hitters at the rate he has been so far this season, but if he does keep it up he might find himself traded to a contender before long.