Unlike several other teams considered to be forward-thinking, the Cubs have preferred to have one reliever at the back of their bullpen that gets most of their save chances. In spite of this preference, they have had a different closer every year since 2015. Rule-5 draft pick Héctor Rondón got most of the save chances from 2014 through the 2016 trade deadline, when the Cubs traded for Aroldis Chapman. Before the 2017 season, they traded outfielder Jorge Soler for one year of Wade Davis. After a heroic effort in a wild game 5 of the NLDS, Davis departed over the offseason for the Rockies and became the highest paid reliever ever (by yearly salary). To fill the void left behind by Davis, the Cubs signed Brandon Morrow who had dominated them in the NLCS. Morrow was dominant when healthy, but did not throw a pitch for the Cubs since July 15th, 2018, leaving underrated setup-man Pedro Strop as the de-facto closer.

Strop has fared well when not dealing with hamstring issues, and Steve Cishek has acquitted himself well as the backup-backup closer, but the Cubs bullpen has struggled as a whole. It was always assumed that the team would pursue bullpen help at the trade deadline if they were in contention, especially if Morrow experienced a setback (he did), but it was not clear what form that bullpen help would take. As bullpen-related losses piled up in a tight NL Central race, it felt as if the Cubs would have to do something soon to stop the bleeding. On June 5th, they signed Craig Kimbrel.

Now, the Cubs’ bullpen has not performed especially poorly on the surface. They have blown a lot of saves, but that can partially be attributed to unlucky sequencing. Over a short stretch, they had the best ERA in the National League. However, that stretch covered up some ominous indicators.

The Cubs’ bullpen has one glaring weakness: getting whiffs. They are currently tied with the Orioles with the second-worst whiff rate in the majors (10.4%), ahead of only the Rangers, making them last in the National League. Overall, they’re 16th in FIP and 11th in ERA. They’re first in ground ball rate, which helps, but they also have the third-highest walk rate and only the 18th-highest strikeout rate. Not only are they not getting many whiffs, they’re also only 23rd in zone-rate, meaning they aren’t throwing enough strikes.

Even if you exclude the earliest part of the season in which the Cubs’ bullpen struggled mightily (before Carl Edwards Jr. was sent down on April 6th to find his delivery again), they remain at the same rank in whiff rate, with a rate of 10.6%. They have a slightly better zone-rate ranking (22nd), but remain at the third-worst walk rate. They have also cut down on strikeouts, sinking to the 22nd-highest strikeout rate. Despite all this, in that stretch they have the fourth-lowest ERA and the 12th-lowest FIP.

The Cubs’ pitching staff as a whole is not built for generating swings-and-misses (with the exception of Yu Darvish and select others)—they’re 25th overall—but it’s particularly a concern in the bullpen, where the ability to miss bats matters more due to the situations relievers are used in. Whiff rate is generally less luck-driven than things like ground ball rate—swings and misses never turn into baserunners, as opposed to balls in play, which often do. Not having a reliever who can get swings and misses leaves a hole in a bullpen and makes it difficult for a team to escape a situation with runners in scoring position. Low whiff rates have not always been an issue with recent Cubs teams; in 2016, their bullpen ranked a formidable fifth in whiff rate. However, that ranking has declined each year since. 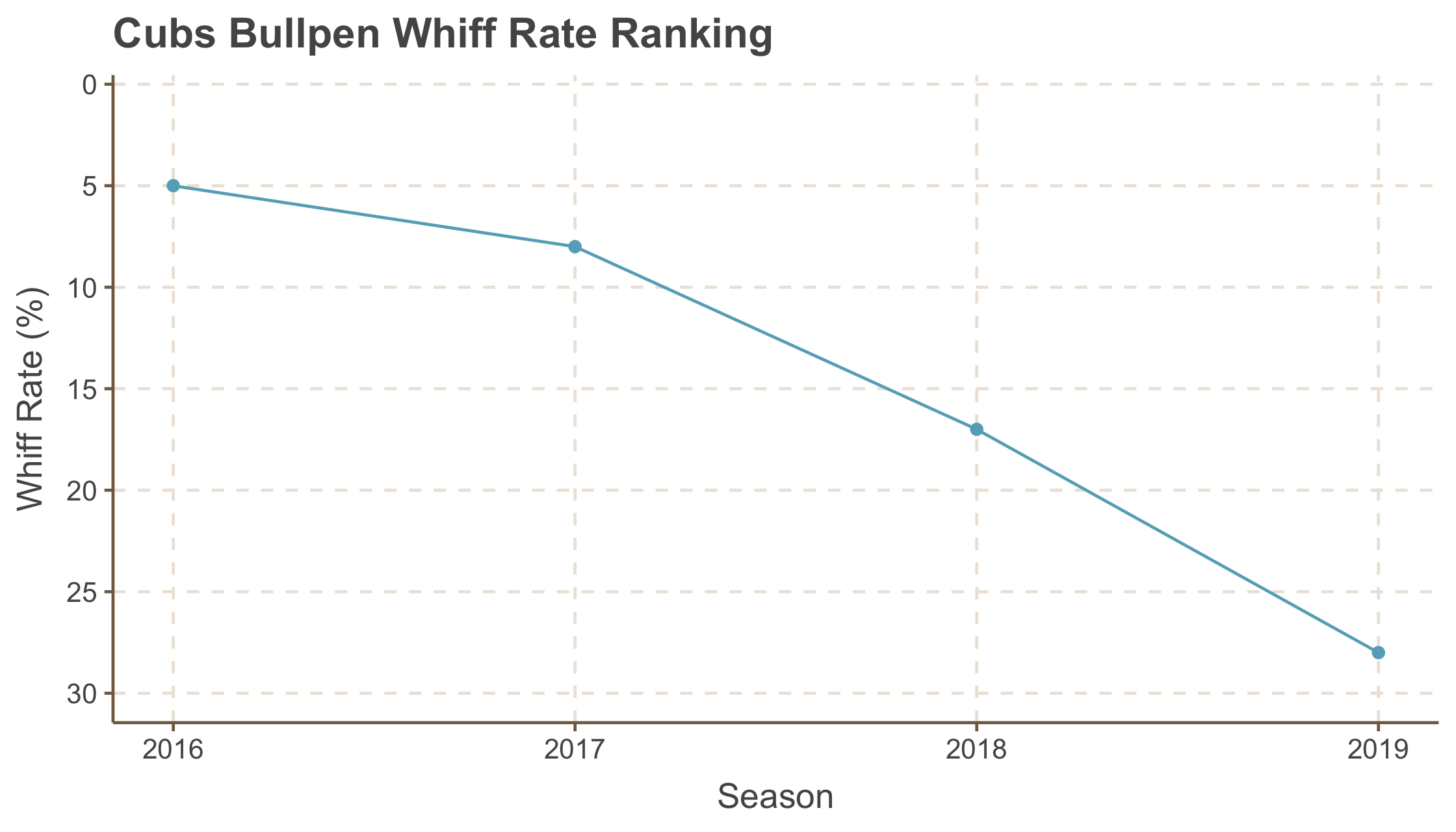 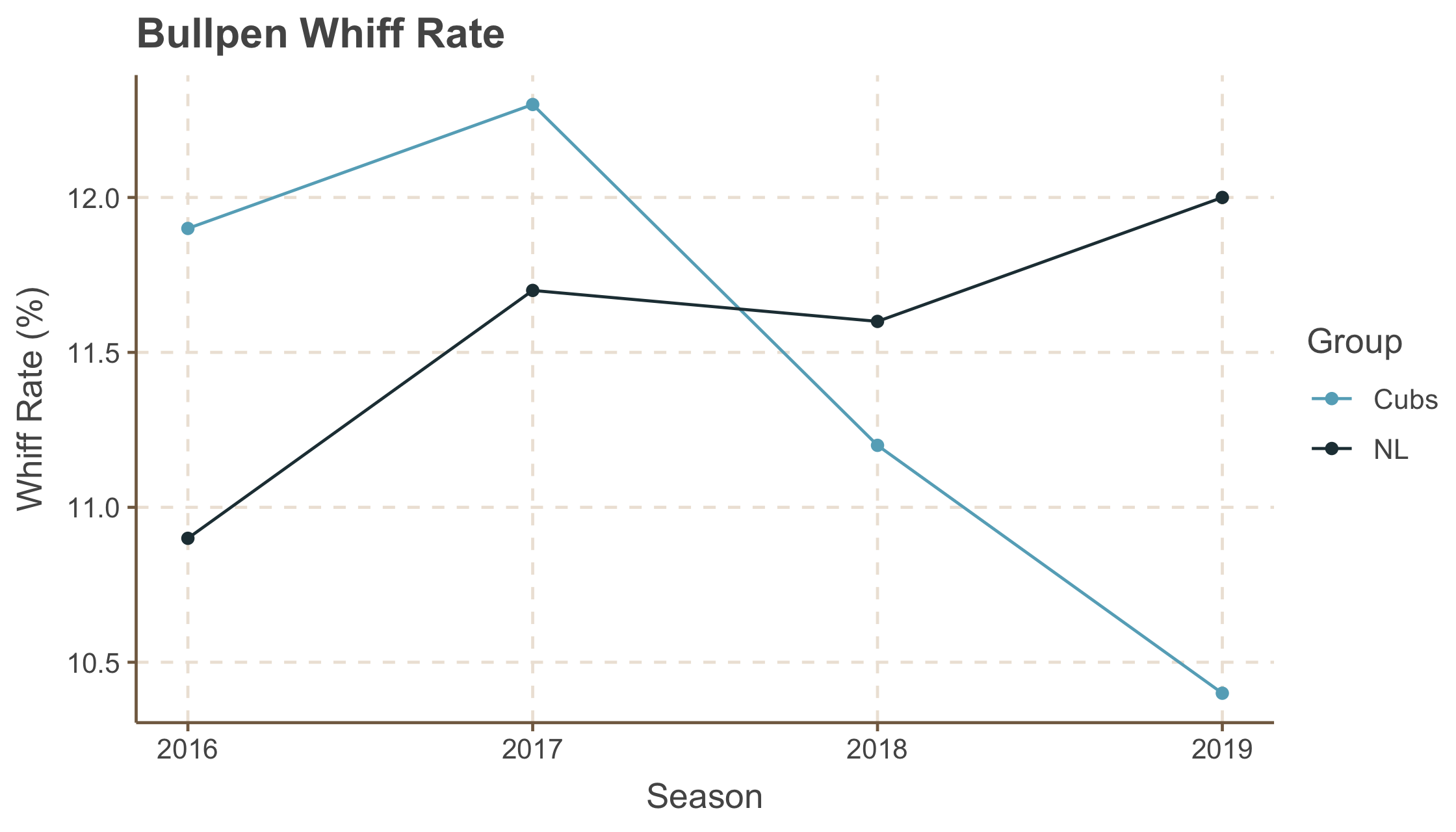 Even with Morrow on the IL, the Cubs have several relief options that have generated above-average whiff rates this season, but most have issues. James Norwood and Rowan Wick are AAA call-ups that have pitched two innings combined in the majors this year. Allen Webster pitched 11 innings before going on the IL himself, and Dillon Maples, while he has electric stuff, has yet to get the chance to prove that his command is Major-League ready. Outside of these pitchers, Pedro Strop is the only Cubs reliever with an above-average whiff rate. Normally Carl Edwards Jr. would be on the list as well, but he struggled early in the season and did not throw quite as hard between coming back from AAA and being placed on the IL.1 In 2018, Brandon Morrow had a rate of 12.9%, which would be above average in 2019, but he’s been unavailable due to injury. In 2018, Kimbrel had the sixth-highest (17.2%) whiff rate among relievers who threw at least 20 innings last year.

A bullpen does not need to survive on whiffs to be playoff-caliber, but the Cubs are currently relying on a combination of high walk rates, low strikeout rates, and unsustainably high ground-ball rates. It was obvious that the Cubs needed bullpen help throughout the offseason, but it wasn’t clear what shape the bullpen reinforcements would take. While the move to sign Kimbrel certainly carries a fair amount of risk, the upside is obvious. While the Cubs’ bullpen has performed admirably considering their difficulties, it became clear that the club couldn’t rely on their in-house options for getting strikeouts in high-leverage situations. So, they paid Craig Kimbrel for his ability to miss bats.