I don’t think we’d be having this conversation if Brad Wieck were healthy. Wieck was one of the best relievers in the league down the stretch last season, and he looked to be a key piece of this Cubs bullpen. However, Wieck is now on the 45-day IL, and the team can’t count on a heroic late September return. With Rex Brothers having struggled in his big-league stint at the beginning of the season, Kyle Ryan is the lone lefty in the bullpen. Here are his percentile rankings in key categories via Baseball Savant: 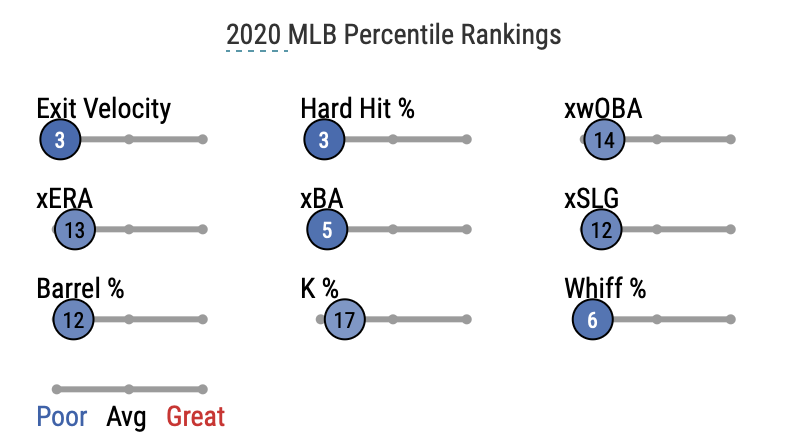 Ryan has lost substantial velocity on his main pitches, and although it ticked up in his latest outing on Friday, he didn’t have much margin for error to begin with. Ryan was good last year, and he could certainly regain his 2019 form, but it would not be wise to count on that and not seek help from outside the organization. Brailyn Marquez and Burl Carraway remain options, but the Cubs seem hesitant to call them up, leaving them on the market for a reliever who can get lefties out.

It’s hard to figure out where those reinforcements could come from this year, as most teams are still in the race–the only team in the National League with playoff odds under 20% according to FanGraphs is the Pirates. The American League is more striated, with the Red Sox, Orioles, Royals, Tigers, Rangers, Angels, and Mariners all having playoff odds under 20%. Even so, many of those teams are only a few games out of a playoff spot, and may be reluctant to sell off key pieces, especially if they’re under team control past the end of this short season.

When it comes to the teams that are out of it, I wouldn’t expect any reliever on an expiring contract to cost much this year. Given Friday’s trade of Brandon Workman and Heath Hembree for Connor Seabold and Nick Pivetta, the market doesn’t seem in the sellers’ favor.

To find names for this list, I looked at three different leaderboards:

I narrowed down the list to pitchers currently on teams unlikely to make the playoffs, and are realistically available to the Cubs. The list I’ve come up with doesn’t sound particularly inspiring, but I believe any of these pitchers would improve the Cubs’ bullpen, and the team shouldn’t have to give up a lot for them.

Watson seems the most likely trade candidate of any on this list. He was only set to make $3M this season, which was prorated down to $1.1M, and the Cubs would be on the hook for a little under half of that. The problem with Watson is that he’s similar to Kyle Ryan, except Ryan was better last season and Watson has been better this season. Watson has similarly lost 2-3 MPH on his sinker this season. Ryan had the left-most release point in all of baseball last year, and Watson had the 6th-farthest left (min. 200 pitches). Like Ryan, Watson doesn’t walk or strike out many batters, and thrives when he’s generating soft contact. Watson has a longer track record than Ryan, but I don’t think he has substantially more upside. The main reason to acquire him is as a Kyle Ryan insurance policy and veteran bullpen presence.

The Pirates haven’t traded much with the Cubs in the past, but it’s possible that with them so far out of the race and with a new front office they’ll consider it. Howard’s surface numbers aren’t great, but he’s struck out 13 of the 37 batters he’s faced and walked only 3. He’s given up a fair amount of hard contact, and he was a bargain bin pickup for the Pirates, so I would assume he would be cheap for a team to acquire. Howard doesn’t have much service time and still has two options, so the Cubs could also hold on to him after the season is over. Regardless of the hard contact, it could be nice for David Ross to have someone who can throw sliders like this to Christian Yelich in his arsenal.

Selman is the pitcher I’m most excited about on this list. He was bad in 2019 (4.35 ERA/6.12 FIP in 10.1 IP), but he’s been good thus far in 2020 (2.70 ERA/2.77 FIP in 10.0 IP). He gained 1.5 MPH on his fastball over the offseason, and its spin rate increased accordingly. Selman doesn’t even have a year of service time yet, so he might be more expensive than other pitchers on this list, but given his lack of track record I wouldn’t think he would be prohibitively expensive for the Cubs. Here’s a video of him striking out Cody Bellinger.

Scott probably has the best stuff of the lefties on this list. He doesn’t have a long history of success, but his slider speaks for itself. Like Selman, he still has a lot of team control left and has higher upside than a pitcher like Watson, so it would probably take more to persuade the Orioles to trade him. Seeing how bad his slider makes lefties look makes me think it could be worth it.

The Red Sox already traded two relievers, so it’s possible they’d consider trading a third. Taylor has been roughed up in 2.1 innings of work so far this season, but he was great last year. If the Sox are okay with trading him for a low price, he could be worth taking a flyer on.

Rosenthal is sure to be traded, as he’s on a cheap one-year deal. The only questions are where, and for how much? Rosenthal was awful last year with the Nationals after returning from Tommy John surgery, and not much better with the Tigers. This year, however, he’s been excellent with the Royals, striking out 14 of the 38 batters he’s faced, while allowing just one run. Whether the Cubs are in on him depends on his price tag. If a team more desperate for bullpen help wants him, it’s hard to imagine the Cubs beating their offer.

Williams is off to a good start after being claimed off waivers by the Mariners in February, striking out 16 of the 47 batters he’s faced. He isn’t going to be one of the best relievers in a contending team’s bullpen, but he probably won’t be the worst, either.

Kennedy is certainly available, but money is an issue; his prorated salary for the year is $6.1M. While he enjoyed a career resurgence in 2019, putting up a 3.41 ERA and 2.99 FIP in 63.1 innings, Kennedy has struggled this year, with an 8.49 ERA and 9.16 FIP in 11.2 innings. While I would expect him to turn his season around to an extent, and he would likely be available for nearly nothing at this point, it’s hard to imagine the Cubs taking a risk on his contract.

There’s no guarantee the Cubs will acquire any of these particular relievers, but I would be surprised if they didn’t get any bullpen help. If they do make some moves before the August 31st trade deadline, I’ll profile the new pitchers here. See you then!